Around the year 2005, the first White-tailed deer showed up in Tenhave Woods. For the next several years, they were finding much of their food outside of the nature park. In 2012, about a dozen deer spent their summer in Tenhave. To remedy this situation, we started setting up some projects to help keep deer out of the park. One of them was part of a July 2012 Eagle Scout project. It involved repairing gaps in the fence alongside the soccer fields. Another project was to figure out how to increase the height of the six foot high fence where homes border the park. From research, it was found that it takes an eight foot fence to keep deer out. We asked the city for a quote to raise the fence and it was $60,000. That amount was considerably beyond our financial ability. Richard Stoll, a Nature Society board member, came up with a much cheaper method using wires.
During the summer and fall of 2012, we spent $14,000 and over 600 hours of volunteer help to secure Tenhave Woods by increasing the height of the six-foot high fence that bordered the homes on Lexington and Custer and repairing most of the gaps in the fence around the perimeter of the park. The fence work was accomplished with an Eagle Scout project, Nature Society volunteers who worked on it for almost a full year, and many people from the general public who answered our call for help. 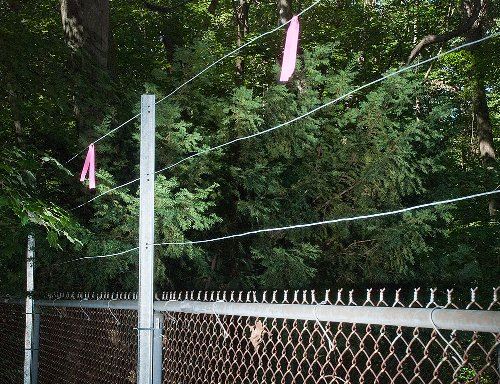 In the spring of 2013, we had two does that managed to find a way into the park. They each produced two fawns. We watched them throughout that summer. The upside was that the plants overall were able to handle the browsing of those few deer. Even with that said, we still didn't want any deer in Tenhave. We have one of the finest collections of wildflowers in Southeast Michigan and wanted to protect this valuable natural area.

During the summer and fall of 2013, we walked the fence and couldn't find a place that seemed to provide a way for them to get into the park. There were a few places that we felt needed a small amount of alteration, but we really didn't feel these were the deer entry points. There were several gates on the Lexington fence side, but home owners were told that they had to keep them closed and locked. This seemed like it was being done. In walking the fence, we found several hundred yards where the fencing didn't reach the ground. But the gap was never more than six inches. In our research on deer fences, we found that if a wire fence was used, the bottom wire needed to be no more than six inches above the ground. But maybe they still got in this way. Then in the fall of 2013, we found that DTE tree trimming crews had opened a section of fence along Custer for access and didn't close it. In talking to the home owner at that location, he mentioned that two does that he had seen recently had multiple, deep scratches along their backs. Eureka! It looks like they were coming in under the fence after all.

During the summer of 2014, we saw that the grown fawns turned out to be one buck and three does. Again as it was in 2013, damaged plant life from the deer was limited.

During the fall of 2014, Nature Society work crews placed logs where there were gaps (between the bottom of the fence and the ground) along the entire Tenhave fence line.

We continue to monitor the fence line for breaches in order to make sure deer do not get back into the park and eat all of our wildflowers which number around 10,000.  Breaches can include gaps under the fence, holes in the fence, wires that need to repaired and fence gates being left open.

The Nature Society thinks that deer are really cool animals. We do not want to harm them but to just "cage them" out of the park. Our Fence Project was designed in order to keep the deer out so the woods can be protected. When the Nature Society was formed, one of its main goals was to protect our nature parks. Excluding the deer is one of the ways to do that.
Notify Me
Pay a Bill
Media Center
Career Opportunities
Interactive Maps
Emergency Alerts
Government Websites by CivicPlus®
[]