What Activates a Snow Emergency?

When a snow emergency is in effect for the City of Royal Oak, all vehicles on residential streets are to be removed or will be ticketed and/or towed. Vehicles are to remain off the streets until plow trucks have gone through the area. Once a snow emergency is called and plowing begins, it takes approximately 24 - 36 hours to plow all city streets, parking lots, dead-ends and turnarounds with crews working 12 hour shifts until the process is complete. 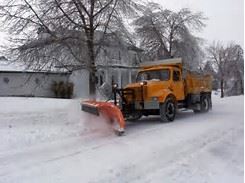 City officials are reminding residents that cooperation is the key to a successful snow removal operation. The operation can't work unless residents cooperate by moving their cars into driveways when a snow emergency is declared. If that happens, City snowplows can move unimpeded through residential streets and restore safe driving conditions much quicker. Residents may call the Snow Emergency Hotline 24 hours a day at (248) 246-3442 to find out if a snow emergency is in effect.

Those who don't cooperate could be ticketed and/or towed under a 1991 ordinance requiring them to move their cars off the street when a snow emergency is declared, but Department of Public Services Director Aaron Filipski stresses that cooperation is "still critical."

On-street parking is prohibited, except with special permits issued through the Royal Oak Police Department Records Bureau, (248) 246-3530, when an official snow emergency is declared. Emergency conditions are generally defined as a snowfall of four inches or more.

City crews are ready to tackle any kind of snowfall, from a light sprinkling to a raging blizzard.

If there's a winter storm watch and a snowfall of four inches or more is expected, we'd recommend that residents remove their cars prior to an official emergency declaration. When the emergency is declared, it's absolutely critical that cars be off the roads.

Here's how the plan works:

This covers snowfall of up to four inches. All major arterial streets such as 12 Mile Road are plowed and/or salted by special routes 24 hours a day as required.

When Priority One routes are done, crews shift to Priority Two routes, which is connector streets and routes leading to schools. Intersections and drop-off areas at the schools are plowed and/or salted during regular work hours, Monday through Friday only. School areas are done only when they are in session.

Crews salt intersections only where the majority of stopping and turning takes place. This permits "tracking" of salt beyond the intersection, and within a few days after a snow, the area is mostly free of ice or snow. Concentrating on intersections protects the streets and the environment, saving the taxpayers money.

This covers major storms of more than four inches of snow. The entire city will be plowed starting with Priority One roads, then Priority Two streets (only if school is in session, otherwise the city goes straight to Priority Three), finally Priority Three roads are completed. Salting of intersections begins when dictated by conditions. Plowing is started in a different section of the city after each snowfall as a matter of fairness.

In the central business district, snow is plowed to the center of the street, then picked-up after all local roads are complete.

The goal is to complete plowing and pick-up operations within 24 hours after the snow stops, and it's much easier to do if vehicles are parked off the street.  The city thanks everyone for their patience and understanding during this stressful time.

The Department of Public Service is often bombarded by complaints when snow is plowed into people's driveways. Unfortunately, it is an unavoidable circumstance because plows are fixed to push the snow to the curb and there's no place for it to go other than the driveway. It means the end of the driveway must be cleared again after the plow goes through.

The City apologizes for the inconvenience, but a plowed street is vitally important for emergency vehicles, and permits residents to go to work, school, etc.

To view the progress of the plows, click on the links below.